PLEASE MAKE SURE TO CHECK BACK AND READ RULES IN THEIR ENTIRETY PRIOR TO CAPTAIN’S PARTY IN THE EVENT RULES ARE UPDATED!

It is the responsibility for each Captain & team members to understand & abide by the tournament rules listed below:

There will be one check in for the Championship: Dockside Inn in Fort Pierce

DOCKSIDE INN CHECK IN
*Boat checking in must be the vessel listed on tournament documents for that specific tournament day
*Teams may begin checking in fish at 3pm and must be checked in with a tournament official by VHF Radio Channel 68 no later than 5:00:00pm (5:00:01pm is late and team will be disqualified)
*Please note, after checking in at Dockside Inn you can only proceed to fish drop off at Causeway Cove by boat (cannot check in fish at Causeway Cove by car)
*Teams will first roll past the Tournament Official on dock at Dockside Inn and show their boat #. They must also call in to the Tournament Official on VHF radio Channel 68 stating Boat # and Team Name. Tournament official must acknowledge your team # on the radio in order to be officially check in.
*Once checked in with Tournament Official at Dockside Inn, teams will proceed to designated dock at Causeway Cove Marina to drop off fish.
* If there is a back up of boats waiting to unload fish, a tournament official will call teams into the dock via Channel 68
*One registered member on team will unload fish and proceed to the “Armory” that will be located behind the stage. (dock carts and staff will be available to help transport fish to Armory)
*All fish must be in a zippered fish bag in order to weigh fish in (no fish will be accepted if not in zippered fish bag)
*Once at the Armory, each fish will be taken out of the fish bag to be inspected and tagged. Fish bag will then be closed and tagged.
*While in the the Armory teams must pick which fish they will be weighing for the tournament. (Total of 3 if in all the calcuttas). Any additional fish will be removed and given to fish house as donated fish.
*The team member  that accompanies fish to Armory will be given a wristband to wear. That team member with the wrist band will be the only person that will be allowed to accept the bag for weigh in.
*Once fish is checked in, team must depart dock. Teams may bring boat back to lodging and/or pull boat from water and return to weigh in by car. (Limited boat parking will be available during weigh in time) 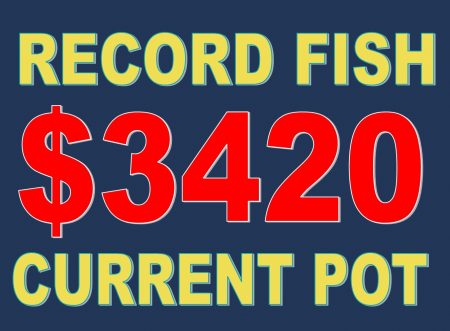 AT LEAST ONE MEMBER FROM THE TEAM MUST BE PRESENT TO WIN ANY AND ALL PRIZES, AWARDS, AND PAYOUTS – No Exceptions